How to Create a Device with a Custom Terminal Layout

Multi-Terminal Devices (MTDs) are User Created composite symbols. An MTD symbol is a nested block, which is exploded after insertion. Elecdes associates all of the individual parts of an MTD with a single device name. This is done via the TBLOCK attribute of MTD terminals and the TAGNAME attribute of the MTD Tag.

The graphical parts (lines, arcs and circles) of the MTD symbol are grouped into a single block when the MTD symbol is saved. When inserted onto a drawing, they are not recognised by the interconnection analysis.

Other standard Elecdes symbols (devices etc.) may NOT be used within an MTD. You can cut and paste the graphical part of any symbol to an MTD but you must not include the attributes.

An MTD symbol can have any layout that you choose.

Note that the exploded elements of an MTD that is inserted into a drawing (tag symbol, terminal symbols and graphic block) are grouped after it is exploded, so it is selected like a single block. Use Ctrl-Shift-A to turn group selection ON/OFF.

The "graphical" elements are grouped into a single block when the template is saved, in an identical manner to saving an MTD symbol.

For more information about using a template for a wiring diagram, see How to Use a Template to Layout a Wiring Diagram.

When inserting symbols or lines etc. onto an MTD you may need to switch layers. When inserted and exploded the individual parts of the symbol will remain on the layers on which they were placed when the symbol was created. Ensure that you select appropriate layers when constructing different parts of the symbol i.e. conductor lines, graphical information and terminals.

Do NOT copy an MTD symbol in the file system of your computer. The name of the graphical parts block within the symbol is expected to be related to the name of the symbol. Copying an MTD symbol file breaks this relationship. The MTD Name function, detailed below, enables copies of MTD symbols to be made correctly.

Procedure to Create or Edit an MTD symbol:

This toolbar button performs the same function as selecting Create/Edit Multi-Terminal Devices from the Elecdes Main Menu. It can be used to begin editing or creating an MTD symbol.

This function will create a copy of the currently open MTD symbol with a new name.

This item will display an icon menu of MTD tag symbols and wiring diagram tag symbols.

The MTD tag symbols are: himtdt.dwg or vimtdt.dwg. These symbols have no important graphical information. They contain the standard attributes of an Elecdes device symbol. Every MTD MUST have one TAG symbol inserted to hold this information. You will not be able to save the MTD until you insert a TAG symbol.

This symbol is used to hold the attribute data required for reporting the MTD symbol in the Bill of Materials. When you place it on the MTD, no attributes will be requested. Attributes, including TAGNAME, are requested when the MTD symbol is inserted onto a schematic drawing.

The TAGNAME attribute will be set, during MTD creation, to the text "TAG". The terminal attributes (T1...T6) of the TAG symbol are unused.

You may create alternative tag symbols with differing graphical appearance as required. The samples provided have a tag with a surrounding box and one with no graphical elements.

When inserting MTD terminals, the terminal number (T1 attribute) is the only attribute requested. The TBLOCK attribute will be loaded with the MTD TAGNAME when the MTD is inserted into a drawing.

When inserting wiring diagram terminals, the terminal number (TERM attribute) is the only attribute requested.

This function allows you to pick the insertion base point for the symbol graphically. This is the point by which the symbol will be located when it is inserted into a schematic drawing.

When an MTD is inserted, existing lines on the drawing will be broken by a box that surrounds the terminals of the MTD. Generally you should ensure the base point of the MTD is aligned with the topmost leftmost terminal.

The function is setting the drawing variable INSBASE in the CAD package. 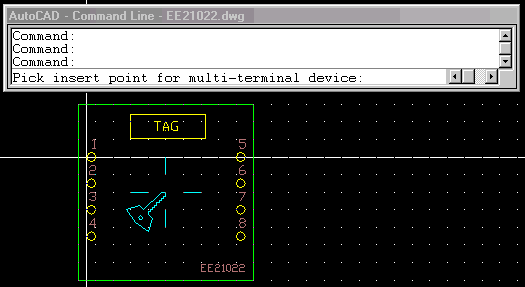 When the MTD symbol is saved, the current insertion base point is confirmed in a dialog. 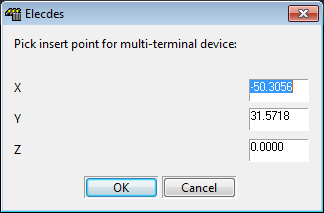 Base point for wiring diagram templates