The Wiring Diagram Generator uses user configurable rules to assign the conductors to the left or right side of a terminal strip. Connections to polarised terminals will be placed on the side specified on the schematic and reported in the connection schedules, unless manually overridden.

If some of the conductors are not positioned on the side that you require, you can use the controls on the right side of the T-Strip Edit dialog to swap the sides of one or more conductors. The controls enable you to move conductors singly or in groups.

Each terminal can multiple conductors on each side. The grid in the group of controls shown above shows these conductors.

Each side has an associated button for moving the selected conductor to the other side. In the centre is a button to exchange the conductors on both sides of the selected row. These are the buttons for moving individual conductors.

To reload conductor positions from the schematic or loop drawings according to the rules in the Wiring Diagram Generator preferences you should completely erase the existing terminal strip diagram from the drawing.

If you never edit the position of wires and cables on terminal strips then you can choose to always reload their positions when regenerating the terminal strip in the preferences for Wirediag. See Properties to Retain When Refreshing Wiring Diagrams.

For information about the user configurable rules the Wiring Diagram Generator uses to arrange conductors on a terminal strip see the section Assign Wires and Cables to Particular Sides of Terminal Strips. 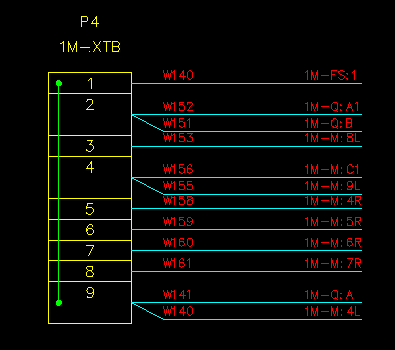