How to Configure Mapping for DWG to DGN Conversion

The DGN Converter uses mapping rules to specify how DWG entities and properties are converted to DGN entities and properties, for example which DGN level to use for each drawing layer. The DGN Converter window has a button to open an editor for each available mapping. The actual mapping rules are stored in separate DBF files in the <EDS>\DGNConverter directory. 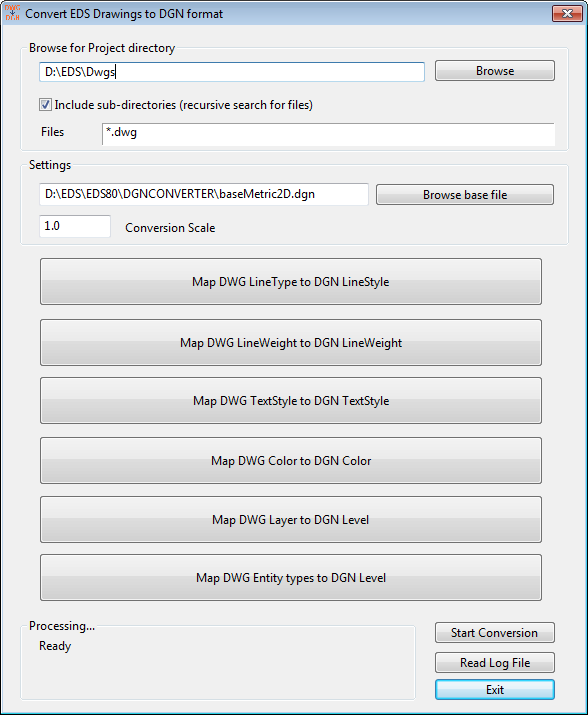 You can map each DWG line type to a DGN line style. In the default mapping file, common DWG line types are mapped to their closest suitable line styles in DGN. You can change these mappings to suit your individual requirements. 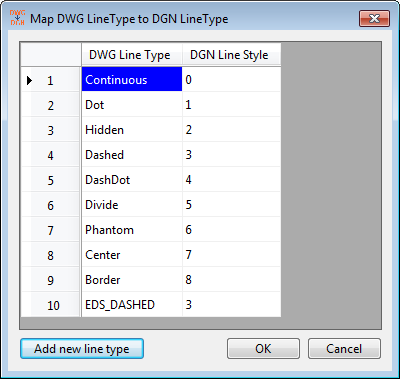 If you use DWG line types that are not currently listed, you can add a new line type to line style mapping rule by pressing "Add new line type".

You can map each DWG line weight to a DGN line weight. In the default mapping file, all of the possible DWG line weights are mapped to their closest suitable Line weight values in DGN. You can change these mappings to suit your individual requirements.

The DWG Line Weight column contains the entire set of line weights that are visible to EDS so you cannot add new entries to the line weight table, you can only change the DGN line weight that each is mapped to. 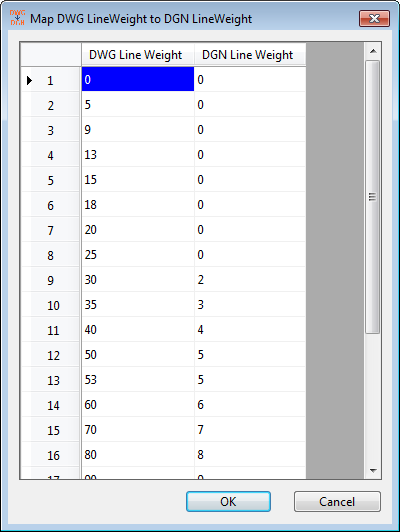 This fall-back for a missing text style mapping does not set all of the properties and does not set a DGN Font ID. To create DGN text properly without a text style, provide a suitable mapping as described below.

In the default mapping file there are no text style mappings, so all text is reproduced by applying DWG text properties to the DGN text. The supplied metric and imperial base DGN files do not contain any text styles.

DGN files can contain text without a text style and instead with individually set format parameters.

The DGN Converter allows you to create DGN text with no text style from a AutoCAD text with a text style by using a map entry that specifies the text properties, like those shown in records 4 and 5 in the figure above. This entry can be used to set the text properties: font ID, bold, underline, over-line and italics. The general format for the entry is ENTRY NAME { FONTID, BOLD, UNDERLINE, OVERLINE, ITALICS } where each of the parameter must be placed within the curly brackets separated by a comma. The table below describes each of these parameters.

In the example above, DWG text using a style named "Style-Arial" would be mapped (via a mapping named "FontArial") to DGN text with font ID 18, is bold, is not underlined or overlined, and is italicised.

You can map each DWG color, specified as an AutoCAD Color Index (ACI), to a DGN color. In the default mapping file, all of the possible DWG colors are mapped to their closest suitable color values in DGN. You can change these mappings to suit your individual requirements.

The DWG Color column contains the entire set of AutoCAD color indices that are visible to EDS, so you cannot add new entries to the color mapping table, you can only change the DGN color number that each is mapped to. 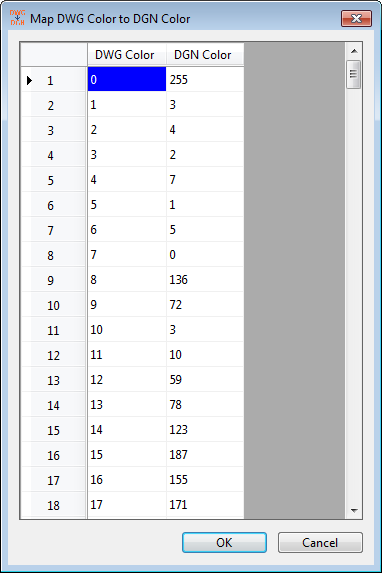 You can map each DWG layer to a DGN level either by name or by number:

All the entities which are on a DWG layer will be placed on the mapped DGN level, unless there is a mapping for that specific entity type - see Map DWG Entity to DGN Level, below. Entity to level mapping overrides layer to level mapping.


You can specify a new DWG layer to DGN level mapping rule. Note that you can only map to a DGN level either by name or by number. Having values in both columns in the mapping file is an error and you will be notified by the system if it happens. Similarly, you must specify a mapping in at least one column and you cannot leave both fields empty.

All of the named levels mentioned in the DWG entity to DGN level map are created before processing the drawing entities, regardless of whether or not there were entities to map to those levels.

If the levels specified in this entity to level map do not also exist in the layer to level map then the created DGN level will be turned off. The mapped levels have no DWG layer from which to copy their properties. You can turn them on in the final DGN to view the entities which now belong to the created levels. 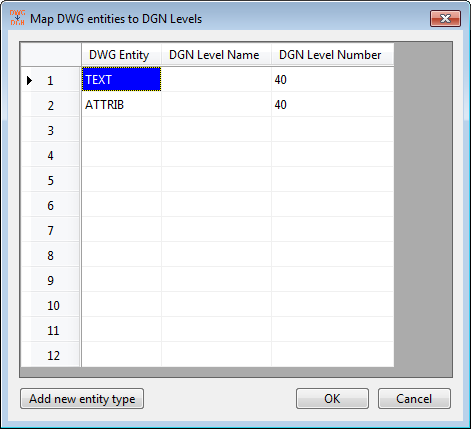 You can specify a new rule for mapping DWG entities to DGN levels. The same restrictions that are discussed above in DWG layer to DGN level mapping apply to the entity to level mapping: you must specify only one of either the level name or level number for each mapping.