How to Draw a Cable as a Single Line

The Polyline Cable Function is provided to create a set of lines and polylines, which represent a cables, linking two or more sets of terminals. The cables are drawn as polylines. Each end of the cable is "broken out" into individual cores(conductors) of that cable.

Up to 3 separate polyline cables can be attached to a single terminal. 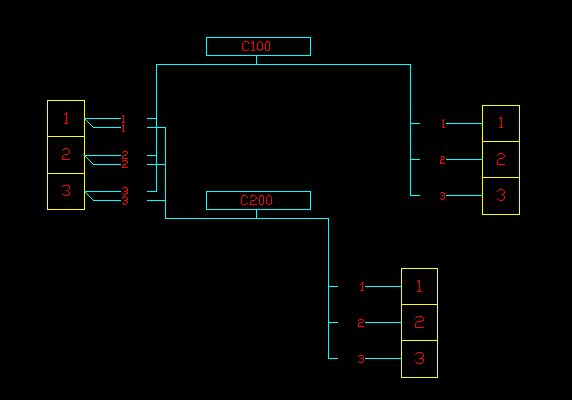 Refer to the Ebase for more information on interconnection.

A cable core marker is inserted upon each of the cable core(conductor) lines and another showing the cable name.

Elecdes has modified cable core(conductor) markers for the construction of this circuit. They are named VCCABLEL3, VCCABLER3, VCCABLE4 and VCEXTN9. These have modified cablename and corename attributes (visibility and justification modifications). They contain the same information as a regular cable core(conductor) marker, just modified in appearance to suit the polyline cable circuit.

Any terminals may be selected for the two terminating ends of the cable. The function will detect the size of the terminals selected and align the connecting wires appropriately.